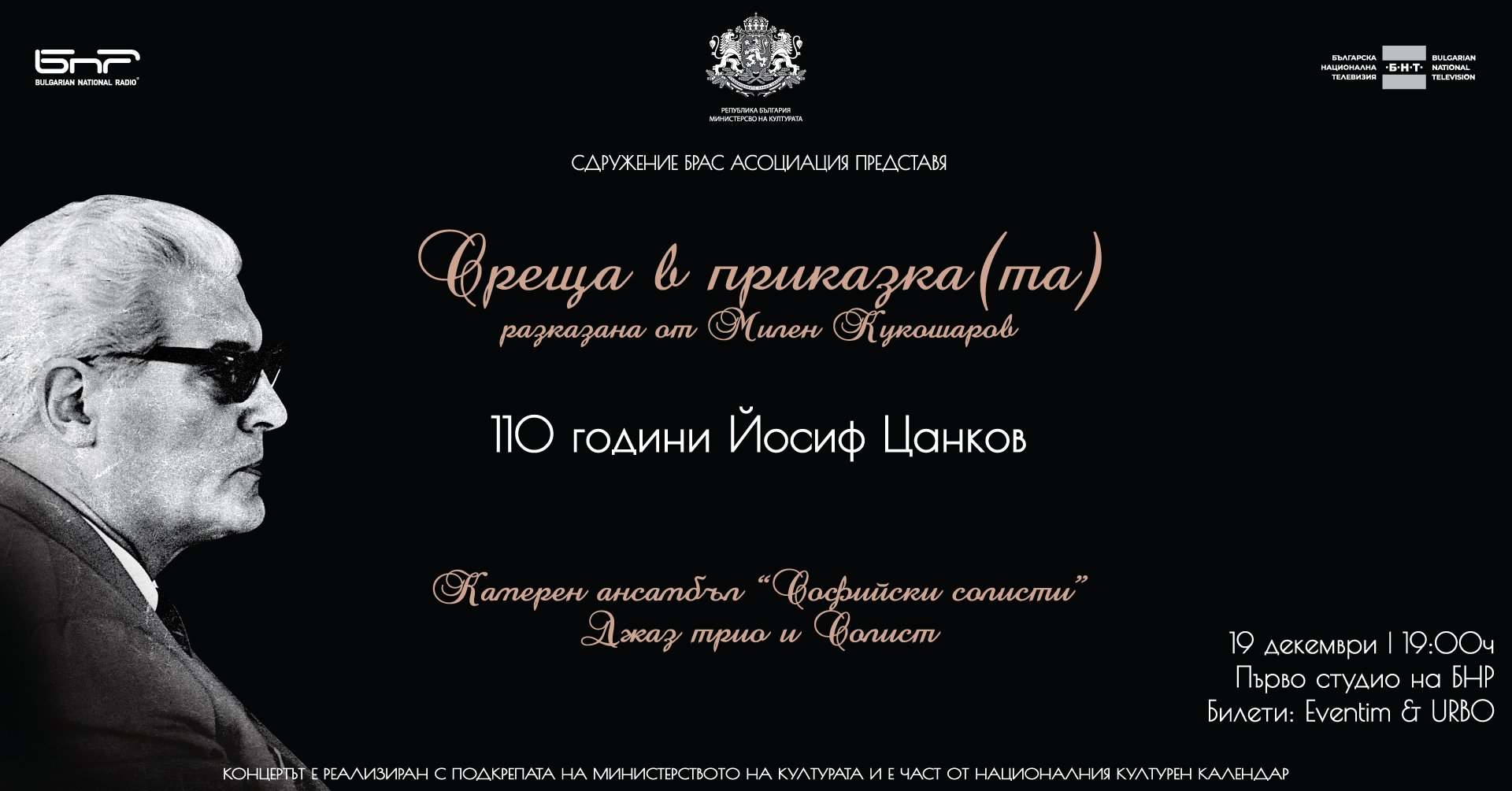 ✦MEETING IN A FAIRY TALE BY MILEN KUKOSHAROV✦

Concert on the occasion of the 110th anniversary of the birth of the composer Joseph Tsankov, performed by the Sofia Soloists Chamber Orchestra, with conductor Plamen Djurov, jazz trio and soloist Velislav Stoyanov

This year marks 110 years since the birth of the famous composer Yossif Tzankov. As you know, Joseph Tsankov or Yoji, as his relatives call him, is an epoch in Bulgarian music, but this place is not deserved by chance, as the composer formed or participated in the formation of the tastes of his contemporaries for many years. During his active creative life - 1929 -1971 he wrote over 500 works that were performed, recorded and most importantly - loved and listened to by the general public. In this treasury there are six operettas, many tangos, hits in different rhythms and styles, pop songs, music for movies and more.
As one of the founders of the national radio in Bulgaria, the music and children's radio programs were realized on his ideas. Chief composer of the Odeon Theater and longtime editor-in-chief of Balkanton, Joseph Tsankov presents us with songs that have been performed and included in albums by famous foreign artists such as Josephine Baker, Claudio Villa, Arturo Testa, Siegfried Valendi, Yosif Kobzon, Beko. During World War II, American and British soldiers fighting Rommel's troops in the Sahara were greeted each morning with Joseph Tsankov's "Caravan," which was broadcast on Radio London, now the BBC.

The place we logically chose for the current concert is the First Studio of the Bulgarian National Radio.
As one of the founders of the Bulgarian National Radio (then Radio Sofia), Yossif Tzankov , in addition to being a composer of a large part of the music performed and recorded by the Radio Variety Orchestra, is also an ideologue of music and children's programs in the media. It is best to celebrate his anniversary in a hall full of memories of Yoji and his music.

The biggest challenge in the program had Milen Kukosharov, who was entrusted with the responsibility to transform the music of Joseph Tsankov, to capture its magic and with the necessary respect for what the composer created to transfer it to our time without losing its beauty.

And so the two artists met in the fairy tale…

♫ And the presentation of this tale will include the Sofia Soloists Chamber Orchestra, conducted by Plamen Djurov, a jazz trio consisting of Milen Kukosharov - piano, Boris Taslev - double bass and Atanas Popov - drums, as well as soloist - Velislav Stoyanov - trombone.

➤ The celebration of the anniversary is realized with the support of the Ministry of Culture and is part of the National Cultural Calendar.

➤ Tickets could be found in URBO and EVENTIM.

According to Order № RD-01-856 / 19.10.2021 of the Minister of Health, as of 21.10.2021 until the revocation of the order, all those who wish to attend a concert performance on the Bulgarian National Radio must provide a valid "green certificate “ оr a negative result from a PCR test performed up to 72 hours before entry or up to 48 hours before entry by a rapid antigen test.